There’s just nothing more comforting than a big bowl of creamy Ham and Potato soup on a chilly winter evening. Especially one as good as this one!

When you throw in the fact that it’s made from leftover ham there’s just no reason not to make a big batch either!

I just love making dishes from leftovers. It makes me feel frugal. Not cheap. Frugal. It’s just the thing to do. Gives me a warm fuzzy feeling!

This leftover ham soup recipe can use other leftovers too. If you’re making soup from holiday leftover ham then you’re most likely to have some leftover veggies too. Most anything goes. Corn, peas, green beans. You get the idea.

Ingredients For Potato and Ham Soup

The leftover ham is the star of the show. It’s the meat component and adds the primary flavor. The potatoes are the meat extender and allow the soup to serve a lot of people with very little meat.

That’s the reason this is such a frugal dish. A relatively small amount of expensive meat that serves a lot of people.

Frozen seasoning blend adds another type of frugality. Time! You could certainly spend your time slicing and dicing celery, onions, and peppers for this soup. However, a package of frozen seasonings blend from the grocery will save you that time without much expense.

The same thing can be said about the stock. Now if you’ve got a ham bone it’s fairly easy to make ham stock but off the shelf chicken stock from the grocery works really well. Time frugal!

Use a little restraint when adding other leftover veggies from your holiday meal. You don’t want your ham and potato soup to turn into green bean soup!

Use your own judgment but as for me, I wouldn’t add more than a cup or so. Maybe two but that might be stretching it a bit.

What Goes Well With Soup For Dinner

Whenever I have soup for dinner I’m perfectly happy with just some saltine crackers and butter. However, a batch of cornbread is ready in about 30 minutes or so and it’s so much better than the crackers! Garlic toast is another favorite.

This soup has everything needed for a good meal so I never have a veggie side dish. To each his own, however, so if you would like something I suggest something green. A good side salad would be nice. Especially with some homemade blue cheese dressing! 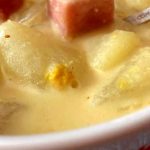 This potato and ham soup is perfect for leftover holiday ham.

Be sure to taste test before adding the salt. The ham is salty and the soup may be salty enough!

To make potato and ham soup in a slow cooker: Melt the butter in a 10-inch skillet until sizzling; add the seasoning blend, potatoes, and garlic. Cook over medium-high heat 5-7 minutes or until most of the water from the seasoning packet has evaporated.

Place the vegetables and all remaining ingredients in the slow cooker. Cook on a low heat setting 4-6 hours or High heat setting 2-4 hours, or until potatoes are tender.

Simply simmer the ham bone in a stockpot along with the chicken stock and enough water to cover the bone halfway.

Bring it to a boil, reduce the heat, cover with a lid and let it simmer at least an hour or until it’s very fragrant. Discard the ham bone.

Replace the chicken stock with your ham broth.

How Can You Make Potato Soup Thicker

What can I do if my soup is too thin? Well, you have some choices. The easiest is to use a potato masher or a stick blender and break up some of the potatoes. The starch of the potatoes will thicken your soup.

Another method, if your soup is not thick enough, is to mix 1 tablespoon of cornstarch with 2 tablespoons of extra milk.

Pour the mixture into the soup and allow it to boil for a few minutes to thicken, while stirring. Repeat the process to thicken your soup even more!

If your soup is too thick once it’s finished, simply add more milk in 1/4 cup increments until reaching your desired consistency.

Can You Freeze Potato And Ham Soup?

This soup does freeze fairly well. The only drawback is that the potatoes will lose a little bit of their texture. In my opinion, that’s not a huge problem. Certainly not enough of a problem to keep me from having a dinner ready soup meal in the freezer.

I do suggest thawing in the fridge and reheating gently to keep the potatoes from breaking up. The microwave is great for reheating.

Overall I think this is a great recipe. You certainly can’t go wrong giving it a try. It’s extremely easy to make, it’s inexpensive, it’s healthy, and most of all it tastes great. Your family will probably thank you for using holiday leftovers to make this Potato and Ham Soup! 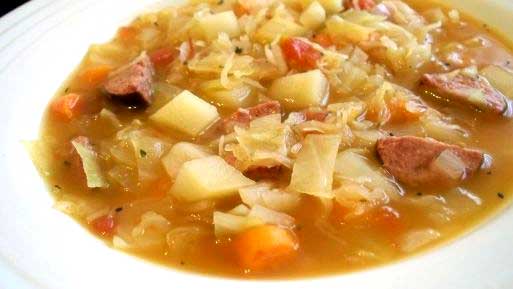